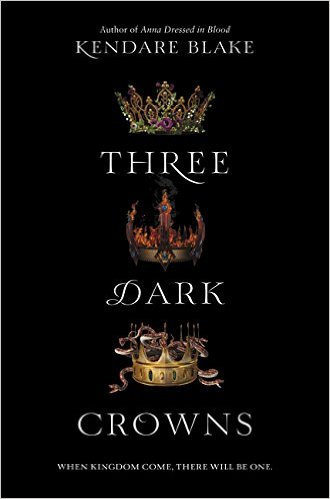 Every generation brings a new set of triplets to Fennbirn; a set of triplets born with three distinct types of magic. This generation brought Mirabella- the elemental (and the sister considered to be the strongest in this generation), Katharine- the poisoner (considered weak, although the poisoners have ruled for generations), and Arsinoe- the naturalist (also considered weak, but possibly hiding a secret). Each of these triplets is an equal heir to the crown. The catch: they must fight to the death to win the right to rule. The fight begins the night that the sisters turn sixteen, and ends when only one sister stands. Who will rule this new generation?

This is a YA novel, that reads like the beginning of a good high fantasy series. It is layered with a huge cast of characters, that I was concerned may get a bit bogged down at the beginning. Blake, however, did a wonderful job of separating out the most important primary and secondary members of the cast, and giving them the attention needed to allow the reader to know them and formulate opinions about them. The world building was phenomenal, especially for the world that was needed in this novel. The story was very intense from the beginning. It did start out a bit slow for me, but it continued to build and got better and better as it went on. It ended on a fantastic cliffhanger, and I need the sequel right now!