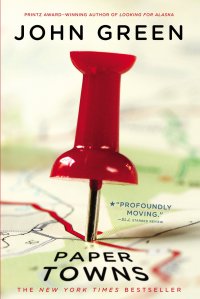 So, as I mentioned before, this was my first John Green book. It’s not the type of book that I normally get in to, but with it having such great reviews (from reviewers and my friends) I decided that I needed to give it a try. It was great! I really enjoyed it.

Quentin and Margo have been neighbors since they were babies, and were friends as children. They grew apart as they grew up, and Margo became a super popular badass, and Quentin was one of the smart, kind of nerdy, quiet kids. Margo did tell the other popular kids that he was off limits, as far as physically pranking or pounding on, but that was about the extent of their relationship….until one night their senior year. Having been cheated on by her boyfriend with another so-called friend, and betrayed by the rest of her friends that knew and didn’t tell her, Margo has had enough. She recruits Quentin to go with her on a series of pranks and hijinks, and then she disappears. No one know s where she ran to, but she ran. Quentin and his friends spend the last month of their senior year trying to make sense of the clues that she left behind to find out where she went, or if she’s even alive.

Green does a great job of character development and scene description. I could really get a sense of who these teens were and what they were seeing. I am a fan! I’ve already picked up Looking for Alaska to read soon!