Hey there, all of my wonderful readers!!! We have a treat today: An amazing author, whom I feel very privileged to call a friend, Jordan K. Rose, has stopped by to visit and answer some questions!

Hey Jordan!! Happy Book Birthday!! Thanks for stopping by to visit with me for a little bit. It’s great to catch up with you.

Hello Tiffany! Thanks for having me on your blog today. It’s a big day for me with the release of Her Vampire Protector, book 7 in the Romance In Central City series, and if there is anyone I want to celebrate with me, it’s you! We had such a great time together in Boston and New Hampshire last October. I’m so grateful we had a chance to finally meet in person.

I am too! We did have such a great time. I can’t wait to do it again! So, as you mentioned, today is the release of book 7 in the Romance in Central City series (which I love!). Where did you get the inspiration for this series?

This is one of those series that I can’t remember how the idea came to me! That sounds crazy, but honestly, I don’t recall! In spite of having a complete lack of memory on how the idea for the series came to me, I can say that I recall how certain characters’ traits arrived. For example, Selene’s scene with the cupcake was inspired by an unfortunate experience I had shoveling Death By Chocolate cake into my mouth in what can best be described as a very unladylike display of eating. More accurately, it was an animal-like moment, resulting in a dire need for a glass of milk and someone on Heimlich standby.

That’s hysterical! I’m actually picturing that right now. As we have found out over the years, we both have an affinity for chocolate (especially dark), so I can definitely see this scenario! Now, on to some questions about you: How did you begin your writing career, or did you always know that you wanted to be an author?

I actually never thought about writing until about 5 or 6 years back when I received a copy of Twilight as part of my anniversary gift from my husband. After that I read some 18 or 19 vampire novels and, bam! I wanted to write my own book. Since then I have never looked back.

I, for one, am very glad that you got those books and got started! Speaking of other books and authors, who are your favorite authors?

I love Charlotte Bronte, Christine Feehan, Hildie McQueen (and not just because of her writing! Hildie is a dear and wonderful friend.), Jane Austen, Kerrelyn Sparks, MaryJanice Davidson, and JR Ward to name a few.

I love Hildie, as well! I am so glad that you introduced me to her. I got to meet her at RT a couple of years ago, and she was just wonderful. I know this is always a hard question to answer when you read a lot, but what is your favorite book? Is there a book or series that you could read over and over again, and never tire of?

A few of my favorite books are: C.S. Lewis’s Trumpet of The Swan, which is one of the most beautiful stories every written. I could read it a thousand times and never tire of it. Jane Erye is another favorite. Mr. Rochester is something else and scrappy little Jane is a favorite heroine. But, being that I love paranormal I might even love Jane Slayer, Sherri Browning Erwin’s mashup a touch more. What’s not to love about adding vampire and werewolves to one of your favorite stories? Last year I read Tarzan for the first time and LOVED it. Of course, I did watch the recent Alexander Skarsgard movie and kept picturing the super-sexy vampire Eric Northman as Tarzan so that probably had something to do with it! Lastly, I love Christine Feehan’s Dark Series. Dark Prince is my absolute favorite and I’ve read it several times.

I, too, am a Lewis fan, but I haven’t read that one. I’ll have to! I haven’t read Tarzan in years. I may have to re-read while picturing Skarsgard, and see how that goes! Haha! So, what are you reading right now?

I completely understand. I think that I am reading 4 books right now, myself. I’m not sure that I could read that many while trying to write my own, though. That’s impressive! What do you like to do when you aren’t reading and writing?

I love going to the beach with hubby or going hiking with my dogs. Recently I took my first cake decorating class which was a lot of fun, though I learned I need A LOT of practice!

I took one of those several years ago, with a friend, and it is definitely not as easy as they make it look. Those little roses are kind of difficult! Are there any upcoming projects that we should know about?!

YEEEESSSSS!!! I’m so excited. This year has so much activity crammed into it I’m afraid if I blink I’ll miss it. So here’s what’s coming: In June I’m releasing my second book in the Spaghetti Romances Series, which is set in Robyn Peterman’s Magic and Mayhem Kindle World. In July an extended version of my novella, Delia & The Werewolf will release in a Box Set titled, Alpha’s of Summer. Later this year book 8 of The Romance In Central City Series comes out. I just saw a markup of the cover and L-O-V-E it! Then, before the year is out the first book in my next series, a spinoff from the Romance In Central City Series will launch.

When I say I’m excited, I mean sometimes I hear squealing and when I stop and focus, I realize it’s me! 🙂

I hope your readers will consider joining my newsletter so that they can keep up with the excitement and be the first to learn of new projects and have an opportunity to receive ARCs from me. If they join, they’ll get some #FREE books, too! Here’s the link:  http://bit.ly/1G1Y903

I can also be found at the following social media sites:

And don’t forget to follow the hashtag #CentralCityRomance for more Romance In Central City news!

Thank you so much for stopping by and spending some time with us today!!! I had so much fun!!!

As mentioned in the interview, the release of Her Vampire Protector is today! Here is the cover, and they buy links, so y’all go check it out!!! 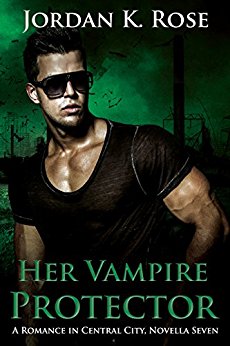