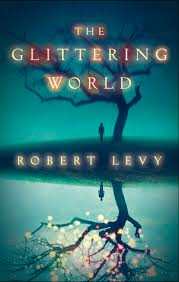 Mr. Levy gained a very happy new reader with his new novel! I initially picked up this read, because it had a blurb on it by the aforementioned (and beloved!) Kelly Link. I am incredibly thrilled that she endorsed this novel, because she did not steer me wrong! Levy’s novel is another of those different, kind of hard to put your finger on, type of fantasy/supernatural thriller’s, but I love his voice. I am a fan of Gaiman, and his writing reminds me of him in a some aspects. It took me about half of the first chapter to really get in to this book, but I’m glad that I continued, because once it picked up and grabbed me it didn’t let go until the very end.

This is truly the story of the main protagonist, Blue, who inherits his grandmother’s home and needs to sell it. He  has not seen this grandmother since he was a small child, nor has he been back to the place where she lived in that same time. He and his three companions, Elisa, Jason, and Gabe, make the journey to Canada so that Blue can see the house and meet with the Lawyer to sign the paper’s on the house. They decide to make a vacation out of it, and stay at a vacation house at a since abandoned artists commune- the same commune that Blue’s mother fled from with him when he was a small boy. While they are there, odd things begin happening- Blue feels that he is being watched from the woods, then when they are out hiking he begins to hear voices calling from seemingly nowhere. Once they make it to the house, there is something found in the basement that changes Blue’s entire outlook on things, even as his memories of what happened in his childhood are starting to come back. They find out that Blue and another girl disappeared when he was young…then Blue and Elisa disappear. Jason and Gabe must do what they have to do, each in their own way, to find their companions.

I love the way that this story was written, in the voice and from the point of view of each character within the novel. Levy is masterful in his descriptions of not only the scenes, but of the characters themselves, so as a reader you feel like you really know them and see where they are. This story of intrigue and self-discovery is one that stuck with me well after the novel was complete. As I said to you before Mr. Levy: Your creepy game is strong, sir! I can’t wait for the next gem!

2 thoughts on “The Glittering World”