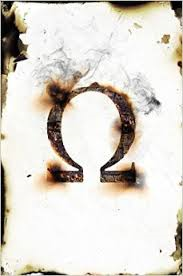 I am in love with this book! It is a completely different take on the post-apocalyptic/dystopian themed books. The concept is really, very interesting. After an event that basically wiped everything and many people out, everything was changed, due to after-effects of radiation and such. One of the biggest areas of change was in reproduction. In this new era, every pregnancy results in twins, and one of the twins always has some sort of deficiency. Most of these are physical (a missing or third arm or leg, a third eye or only one eye, etc), but some are born “seers”. They can sense or have visions of things from the future or past. They are called Omegas, while the perfectly fine twin is the Alpha twin. The Omega twins are always sent away to villages for Omegas, where they suffer for the majority of their lives, but are not killed, because when one twin dies, so does the other.

The main character in this novel is an Omega, Cass, who is a seer. Her twin, Zach, was very angry at her, because she hid her ability for a very long time, which led them to be outcast, because no one knew which twin was the Omega. Once Cass was sent away, Zach became very ambitious and quickly rose to power. He becomes known as The Reformer, and has teamed up with an Omega seer to bring out horrible changes in the way that Omegas are treated. He has Cass found and locked up in order to protect himself. Cass finds out about the horrible things that he is doing, and finds out about an Omega island, and breaks free. She teams up with a boy with no memory of his past, who she calls Kip, in order to try and find the island. This story is centered on their journey and the ensuing Omega Resistance. It has some amazing twists and turns that will keep the reader on their seat. I can’t wait for the next novel in this series!