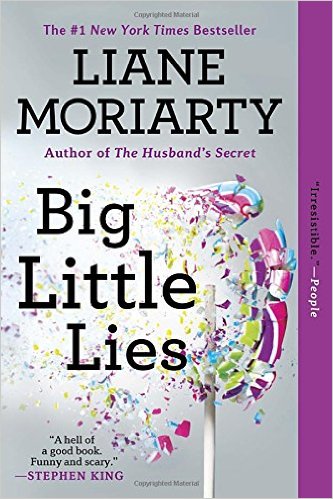 Someone is dead… Was it murder, an accident, or somewhere in between? Welcome to the Pirriwee Peninsula in the suburbs of Australia, where everyone knows everyone, or so it would seem. Jane, a young mother to five-year-old Ziggy, has just moved here to start over. She is young enough that she is mistaken as a nanny. She befriends Madeline, who is as outspoken as they come, has a teenage daughter whom she fears that she is losing, and a son in Ziggy’s class. Her ex-husband and his wife have also moved to the Peninsula, and have a daughter the same age, in the same class. We also meet Celeste, a beauty to behold, with rambunctious twin boys, a wealthy corporate husband, and a mind that is constantly running in circles. With them, along with the rest of the cast, we learn that it’s the little lies, that could have the largest impact.

This is the first of Liane Moriarty’s novels that I have read. I admit that I, initially, picked it up because I wanted to watch the miniseries, and I won’t watch until I have read the book. (Yes, I am one of those people!) I am very glad that I picked it up! This book reminds me of a cross between Pretty Little Liars and Desperate Housewives- It was delicious! Once I got in to it, I didn’t want to put it down. The characters are all well fleshed out, with very individual personalities that allow the reader to decide to love or hate them (or somewhere in between). It really took me until very close to the reveal to decide what the answer to the actual mystery was, but I didn’t see the twist coming! I will definitely give another of her books a try in the future.