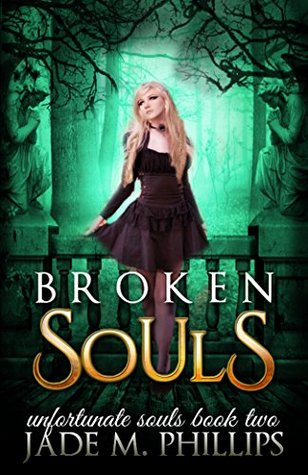 Book two in the Unfortunate Souls series picks up where book one left off- with a cliffhanger. Guy Stone, the hunter of Unfortunate Souls, has fallen in love with the newborn teenage vampire that he saved, Ruby Carter. Not only has he fallen for her, he bonded to her when she saved his life. Despite his love for her, he did what he thought was best for her and took her to Tombstone to integrate with her own kind. Unfortunately, suspicions arose upon her arrival and Ruby was       imprisoned. Her hope was that Guy got away safely. Her hope was for nothing, though, because Guy was attacked as he was leaving and was also imprisoned in Tombstone, as well, unbeknownst to Ruby. He is facing sure execution, now. How will the unlikely pair make it out of this situation alive?

I enjoyed this book as much as, if not more than, the first book in this series (Unfortunate Souls). The world building and character development got even better in this second installment, in my opinion. This story is different than the normal “vampire story”, and I really appreciate this take on the genre fiction. I think that fans of this genre will really enjoy this series.